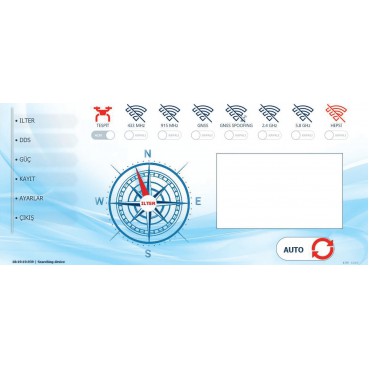 GREET detects both rotary and fixed wing UAVs which communicates on 400, 800, 900,
1200, 2400 and 5800 GHz ISM bands from a distance of minimum 1500 m. up to 8000 m.
and neutralizes them by jamming on these ISM and GNSS frequency (GPS, GLONASS,
GALILEO, BEIDOU) bands. Additionally, GREET allows the operators to create their own
jamming frequency profiles.

Drones are controlled by remote controllers or they can flight by auto-pilot by using GPS
coordinates. While on flight, they transmit video and/or telemetry data to the user to be
controlled accurately. Otherwise, it is not possible to reach the right target especially which are
far away from the flight start point. A real signaling between a drone and remote controller of
it is shown in Figure 2.

GREET follows both video and/or telemetry data signals emitted by drones and remote
control signals on the frequency bands of 400 MHz, 800 MHz, 900 MHz, 1200 MHz, 2400
MHz and 5800 MHz.
There are two different modes for GREET, auto and manual. On auto mode, GREET detects
the threats from all the directions and neutralizes them without an operator and records all the
process. Briefly, GREET is a no need operator system on auto mode. On manual mode, after
detecting the threats and their directions, it warns the operator and wait for the command from
operator to neutralize the threat. Additionally, by its user friendly interface, it allows the
operator to jam on all the frequencies one-by-one.

GREET offers the option to the operator to spoof on GPS bands to mislead the drones which
uses the GPS coordinates during flight with remote control or auto-pilot. Actually, by
spoofing on GPS, GREET
to a critical infrastructure. When GPS Spoofing of GREET is on, all the drones are directed to
the safe zone, sea, which is shown in Figure 3.

GREET detects the threats on all the directions by its omnidirectional antennas and provides a
full coverage protection against swarm drone attacks in which the drones come from different
directions. Additionally, it can be used with directional antennas to detect the threats from a
specific direction and this comes with an extended detection and neutralization range.
Figure 4. User-Friendly Interface of GREET

There are several solutions to detect the drones, like radars, cameras, acoustic sensors etc. Each
of them has some advantages and disadvantages.

Thermal cameras are mostly used to detect the drones both on day and night. Unfortunately, the
detection range of them are up to 1000 meters. Additionally, especially in warm climate
territories, false alarm rate of thermal cameras increase because of high temperature. More on,
maintenance of outdoor cameras is difficult to handle, such as the lenses are need to be spotless
on all time to not to increase the false alarm rate.

Because the high acoustic noise floor, the detection range of acoustic sensors is about 500
meters and they are appropriate to use near field detection in rural areas.

Because all drones transmit video and telemetry data to the user and are guided by remote
controllers, RF sensors are widely used to detect them. Hence the output RF power used to
transmit video and/or telemetry data is regulated to around +20 dBm, drones have the capability
to communicate from a distance up to 8 km. Because drones use omnidirectional antennas to
transmit RF signal to all directions, RF sensors can detect the drone signals even if they are at
the opposite side to remote controllers of drones. In addition, as well as RF sensors detect drones
from farther, they can also detect the threats from high altitudes in contrast to radars.

Jammers are the most effective drone defeating system for today. There are some other
solutions like catching nets, birdshot cartridges, laser weapons etc. but the non of them can
defeat the threats as far as jammer. In addition, because the drones are very fast, to take sight
on a moving drone is too difficult. So, for today, it seems jamming is the only solution to defeat
the drones.

In conclusion, ratio between distances of jammer to drone and drone to remote controller is the
performance criteria of drone neutralization systems.

Network and electricity infrastructure details will be cleared after site survey.

System solution is going to be proposed after site survey.